It Was a God-Thing! 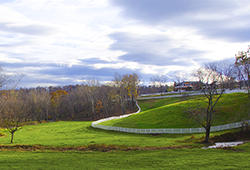 When a woman I met at a past LWML convention asked me to contact her about doing some charitable planning, I did what I normally do-called later and made the appointment. To make the most of plane trips with rental car expenses and hotel stays, I meet with other long-time LWML donors and leaders who also live in or near those areas I am visiting.

That's how I met Ruth Ann Arbeiter and her husband, Willard. After visiting with the woman from the Convention, I drove to the Arbeiters in Gorham, IL. Ruth Ann has been a long-time member of the LWML and past president of the LWML Southern Illinois District. This trip gave me the opportunity to thank her for her contributions to LWML with an autographed copy by past presidents of WOMEN IN LEAGUE WITH THE LORD.

"We really didn't know what Pat was about, but we wanted to be hospitable," Willard recalls with a smile. "It really turned out to be a 'God thing.' We had already completed a long drawn-out estate plan and thought we were done. But Pat showed us some other options that included the land we wanted to give to LWML and several other ministries at our deaths. We tried to sell our land earlier, but it just wouldn't move. God had other plans."

So true! Several visits later, we met with their attorney son, Ron Arbeiter, to sign a charitable trust document and the deed for the farmland that they used to fund the trust. LCMS Foundation as trustee of the Arbeiter's charitable trust sold the land tax free. The proceeds are now invested for lifelong income for the Arbeiters.

"After we learned of the benefits of donating the land now to a charitable trust, we decided to move forward," Ruth Ann explains. What a wonderful surprise when I learned of their decision while on the road in another state. From that time until the closing, we e-mailed and telephoned each other to get all the necessary information.

The Arbeiters now receive increased income from the tax free sale of the land which pays them for the remainder of their lives. Since the land was a partial gift, they also received a large income tax deduction. After the Lord calls them home, the trust remainder will be distributed to LWML and several other ministries.

"God has been good to us," Ruth Ann reflects.

"That's for sure!" Willard adds. "We're very happy with how all this happened. Little did we know how that first visit with Pat would end up. It was definitely a God-thing!"

For more information about charitable trusts, contact linda.gage@lfnd.org or call 800-741-4138.