It Takes a Team! 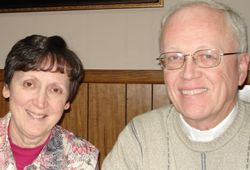 Occasionally, a man finds his way to my gift planning sessions at LWML events. Such was the case when Mark Burger, pastor of Redeemer Lutheran Church in Claremore, OK, attended the last LWML Oklahoma District Convention.

"Roz [his wife Rosalind] was doing something else at the Convention," he recalls, "and I wanted to finish what we started a long time ago, but I needed a kick-start. Listening to that presentation got us thinking again."

So, Rosalind, Pastor Mark and I restarted the process with an LCMS Foundation survey called, "A Lifetime Plan for Giving" which consists of five parts: people, property, plans, planners and prayer (available online at www.lwmlgiftplan.org).

Over the course of several one-on-one visits and numerous e-mails and phone calls, they decided on a charitable estate plan-a charitable trust that will be funded at the death of the first spouse with the deceased spouse's taxable assets. Because the trust is charitable, it is tax-exempt. The trust will pay income to the surviving spouse for the remainder of his/her life. At the second spouse's death, the trust will terminate and its principal will be distributed to the Burgers' favorite ministries, including LWML.

"We decided that we have enough other retirement income to take this approach," Rosalind added. "So we are both very comfortable with it. If anything changes, so can the charitable trust until the Lord calls one of us home!"

The icing on the cake, so to speak, was being able to work also with the Burgers' attorney, a woman who just became an LWML Zone president-Cherie Meislahn of Pryor, OK. Both she and Rosalind have been active members of LWML for decades. Cherie has been a practicing attorney for seven years. Rosalind taught in Lutheran and public schools for nearly 30 years while Pastor Mark served as a Lutheran teacher for 12 years and as a pastor for the last 18 years. Currently, he is a circuit counselor for the Oklahoma District.

"It feels good to get this done," Rosalind concluded. "We finally have it on paper now after thinking about it for years. We just didn't know exactly how or what to do." Their plan will continue with Cherie as they work through a revocable living trust for their children.

For more information about creating a charitable estate plan based on personal needs and desires, contact linda.gage@lfnd.org or call 800-741-4138.