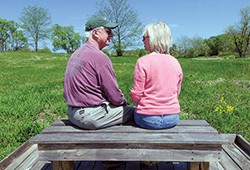 A lot of coincidences? Not hardly! "The Lord had his hand in all this!" Pastor Stier reflected with a warm smile.

After that initial meeting at the Convention in Duluth, we met several times at their home in Hinckley, MN, so they could learn more about the benefits of charitable planning based on their own circumstances.

Eventually, our meetings led to their decision to fund a charitable trust with land that Pastor Don had inherited from his father. This provided a number of blessings for them: lifelong income from the trust for both, income for their children after Pastor Don and Elaine are called to their heavenly homes, a direct gift for LWML, a handsome charitable income tax deduction and the elimination of a capital gains tax. It also removed the need for the eventual probate process in another state.

"We're very happy that we decided to go this route," Elaine commented. "It has relieved us of selling and all the maintenance that goes with real estate. This has been a great way to multiply a talent that the Lord blessed us with. It was a big step to take, but we're glad that we moved forward."